Clerks of the Metropolitan Police 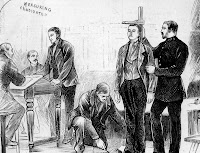 From 1829 until 1864 Charles Yardley worked as Chief Clerk alongside the Commissioners of the Metropolitan Police and was highly respected. The junior clerks worked on the 1st. floor of No. 4 Whitehall Place whilst the Chief Clerk shared the 2nd. floor with the Receiver and his staff. Sir Richard Mayne had the 3rd. floor all to himself. The ground floor was occupied wholly by police – overseen by the Superintendent of A Division, John MAY.

In 1841 a new clerk was appointed to the Candidates Department. This was 20 year old Edmund George MAY, third son of Superintendent John MAY. Edmund’s career was to be with the police civil staff and in 1845 he transferred to the Correspondence Department. Promotion to 1st. Clerk came in 1856 when he transferred to Finance and Accounts. When Charles Yardley retired in 1864 Edmund was promoted to the top job of Chief Clerk. However, the path to the top had not been smooth for Edmund was hot-headed. Inspector Tanner of the Detective Branch had occasion to report Edmund for showing “a want of command of temper” alleging he systematically insulted detectives. Yardley had also reprimand him for leaving the office with work left undone.

Everyone must have sighed with relief as Edmund’s retirement approached. On the morning of 6th. August 1880 Edmund received notice that he was to receive an “excellent pension”. He was living at Rose Cottage in Streatham Place, Brixton Hill and later that same day he came in from his garden, pulled the blinds in his room, rang for a servant and told her to fetch his son for he felt “as if he were going to die”. He fell to the floor – dead.

Those of you who have been following my blogs on Edmund’s brother, Charles MAY,

For the in-depth story of the early Metropolitan Police Clerks I can do no better than recommend “From Quills to Computers” by Norman Fairfax.

If you would like some help with your Metropolitan Police Research I can be reached on the following e-mail address (you will need to type it into your e-mail as this is not a direct link).