No, this is not the name of a comedy act but the story of yet another two brave Police Officers.

One summer’s night in 1884 a felon named Wright donned a set of false whiskers, armed himself with revolver, knife and jemmy and set out on his night’s work in Hoxton. He met up with an accomplice named Wheatley and they broke into a furrier’s shop and made off with several sealskin bags, some opera glasses and various items of clothing. In the wee hours of the morning they concealed themselves in the yard of a nearby school where they considered what to do with their loot.

Police Constable G429 Garner was patrolling his beat at 5am. He entered the churchyard of Holy Trinity to have a look around and suddenly noticed movement in the adjacent schoolyard. He leapt (or maybe clambered) over the railings and managed to “collar” Wheatley. As the constable fought to subdue one thief the other made off. Wright turned to see if his accomplice had managed to free himself but on seeing that he was pinned down he raised his gun and fired. The shot missed its target. A few seconds later he fired again and this time the bullet hit the constable in the thigh. He made off down the back streets of Hoxton hoping to make his escape. But suddenly his way was blocked by two police officers and a crowd of people. He warned them to stay away or he would shoot and with that PC Snell rushed him with his truncheon drawn. Wright fired and made off down an alley. The police officer fell to the ground shot in the stomach.

When Wright reached Nile Street he climbed over rooftops in order to evade his pursuers. It was all in vain because minutes later the block was surrounded by fifty police officers. He would have fired but he had damaged his gun whilst clambering up walls so he threw whatever came to hand. Eventually he was arrested and dragged off to the Police Station.

Meanwhile, back in the schoolyard police had come to PC Garner’s assistance and Wheatly was arrested. The two injured constables were taken off to St. Bartholomew’s Hospital where they remained for at least a month. They were visited by The Commissioner who recommended that both officers be promoted to Sergeant.

At the trial Wright stated that “I am the man that’s done this. I carry the revolver not to frighten but to FIGHT them”. Wright was sentenced to life whilst Wheatly got 20 years.

Constable Garner was promoted to Sergeant and transferred to P Division in South East London. On 15 December 1892 he blew his whistle to summon assistance as he was trying to arrest a prisoner in Howson Road near to where he lived. As he was doing so he suffered a heart attack and fell to the ground dead right opposite his house. The coffin of Police Sergeant P6 Garner was carried to the grave by eight of his fellow sergeants.

I eventually managed to find Sergeant Garner’s grave in an overgrown part of the cemetery. The grass grows tall and at times I was surrounded up to my waist – but I did not give up the search. A policeman mentioned in the Met’s Book of Remembrance and on the National Police Memorial Roll of Honour is always worth searching for. 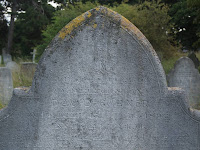 Further pictures of Sergeant Garner’s grave can be found on my Flickr site:

In 1886 Police Sergeant Snell had to retire on medical grounds. He retired with his family to Croydon but died in December 1894 just two years after his colleague David Garner. At the time of his death it was reported that most of his £41 per year pension must have gone on medical bills. To bring in a little extra money his wife was working as cook at Thornton Heath Police Station.

Ex-Police Sergeant Snell was buried at Croydon Cemetery in grave number 26495 Section BB Square 3. I have tried to find his grave but the location is now just a grassed area. The entry within the burial register shows “Reverted common as P.G. uncoloured”. As I am unable to bring you a picture of his grave I will include instead his portrait. 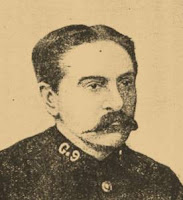 If you are unable to get to London to check out the MEPO series I am always here to help – at least for the next year.