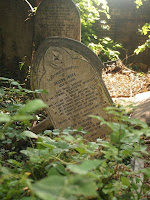 At the age of 21 Joseph joined the Metropolitan Police and spent most of his early service in south east London. Late in the evening on a summer’s night in 1876 Joseph happened across a woman who said “I have killed my child, it is quite dead, I have done it”. Whilst leading PC Joyce back to the house the woman rambled on about an argument with neighbours. It turned out that Caroline Goody was co-habiting with John Guthrie and looking after his three children. Caroline was often a little worse for drink and noisy arguments were not uncommon.

On this particular night John had gone out and left Caroline alone with little Charlie who was just 3 ½ years old. the neighbours heard Charlie screaming and called the police. PC Clark arrived and had to crawl through a window to get into the house. There he found little Charlie bleeding profusely from a deep gash in his throat. About the same time PC Joyce arrived at the house with Caroline and seeing the injured child he immediately took her off to the station to be charged. PC Clark rushed the child to the nearby Seaman’s Hospital where he was found to be unconscious from loss of blood. Fortunately for Charlie the knife had just missed his main arteries and he did recover – although he was in hospital for the best part of a month.

Once Caroline was in custody PC Joyce returned to search the house. He found a knife covered in blood under a stool in the kitchen. There was a pool of blood on the kitchen floor and he had seen blood on Caroline’s apron. Case solved !

Caroline was found guilty of unlawful wounding and sentenced to 18 months imprisonment.

Later in his career PC Joyce was transferred to the Detective Department and promoted to Sergeant. One day in June 1892 a baker from Dalston reported that a man named John George Wenzel had stolen money from him. Detective Sergeant Joyce accompanied the baker to Sandringham Buildings in Charing Cross Road to look for Wenzel. From items found in Wenzel’s room it was apparent that he was the thief but as Joyce was about to arrest him he pulled out a gun and started shooting. The Detective was shot in the abdomen and arm but continued trying to restrain Wenzel until more police officers arrived. At the hospital he was told that he was in a very dangerous state and asked to say how he met with his accident. He could hardly speak but managed to slowly whisper the words “I was catching a thief when the prisoner in custody fired at me in Charing Cross Road” with that he lapsed into unconsciousness and died a few hours later.

Wenzel was later found guilty of the murder and sentenced to death. Detective Sergeant Joseph Joyce was buried in Abney Park Cemetery. Over a century later his headstone still stands proud but it is sad to see that the grave is subsiding and the stone has toppled to one side. Perhaps the Detective is telling us – “this is how I fought with the man”.


If you have a Metropolitan Police Ancestor in your family then you will find service details at The National Archives.


If you would like some help with your Metropolitan Police Family History then I am always pleased to help. I can be contacted on the following e-mail address - but you will need to type this into your E-mail as it is not a direct link: