Robert was born in Scredington, Lincolnshire in December 1864 the son of Robert and Mary Wright. At the age of 17 he was working as an “indoor” servant for John Leak a farmer in the neighbouring village of Helpringham. At the age of 25 he journeyed to London and joined the Metropolitan Police Force. He was issued with warrant number 75017 and posted to “W” Division where he can be found on the 1891 census working at Croydon Police Station.

In the summer of 1892 Robert married Bessie Buckhurst and the following year a daughter, Ada Ellen, was born. On Saturday 29th. April Jane Buckhurst, Bessie’s sister-in-law came to visit the new brand new baby. In the evening Robert walked Jane to West Croydon Station and then he went off to work. About the same time a local oilman closed up his shop at 99 North End and rushed off to catch the 11pm train to Gravesend to join his family.

In the early hours of Sunday morning a man came running into the police station saying there was a fire down the road. PC Bond went to investigate and as soon as he saw the flames he blew his whistle to raise the alarm and summon help. PC Nunn was despatched to the Fire Station whilst PC Bond started to evacuate the neighbouring houses. Other constables arrived on the scene including PCs Wright and Bennett who went round the back of the premises. Once they had broken in they noticed the gas was still turned on at the meter so that was quickly turned off. The shop stored colza oil, linseed oil, turpentine, mentholated spirits and paraffin – all highly combustible ! The constables thought they heard a shout from inside the premises and went in further to investigate. Burning oil was dripping through the floor and they were driven back by smoke and fumes. Suddenly flames burst through a door and they were nearly thrown off their feet. Fortunately at that point a window blew in and they managed to reach it. Another constable was standing outside and shouted for them to jump. Barnett did just that, landing on a “hot tin roof” in the process. Wright did not make it in time and disappeared from view. At this point the first fire engine arrived – some thirty minutes after the alarm had initially been raised. As the hoses were plied on the flames Inspector Lemmey and a fireman went round the back to see if there was any hope of rescuing Constable Wright. They did find his body and he was rushed off in an ambulance but was found to be dead on arrival. The cause of death was given as suffocation.

At the inquest the Coroner stated that the Police had acted “with admirable courage, judgement and decision of character and the fact that more damage had not been done was owing to the promptitude with which they acted in the first instance”. One astonishing fact to come out at the inquest – at least astonishing by 21st. century standards – was that apparently it was an unwritten law that firemen wanting refreshment during the course of a fire applied to the police to open a public house. This fire was no exception and the Engineer applied to Inspector Lemmey stating that “his men could not work unless they had some brandy”. The inquest heard that when the men started their work they were all in a fit and proper state. At the end of the night two were drunk !
The funeral of Police Constable 538W was held on 5th. May and was a very grand affair. The streets of Croydon were crowded with residents wanting to pay their respects and in the central avenue of the cemetery the crowd stood 7 – 8 deep. The W Division Band headed the procession, followed by the open hearse carrying the coffin which was concealed from view by masses of beautiful flowers. Next came 300 men from W, A & P Divisions marching four deep to the slow strains of the band. Three mourning coaches followed carrying PC Wright’s relatives. These were followed by Inspectors and Sergeants of Police. The Croydon Volunteer Band came next their uniforms showing up bravely in contrast to the sombre uniforms of the constables. The rear of the procession was made up of firemen, their helmets shining brilliantly in the sunlight. First were the men of the LCC Brigade with their manual engine, followed by a full muster of Croydon firemen. They were followed by the Croydon steamer and then by a detachment of men from Forest Hill. Men and manual engines from South Norwood & Merton and firemen from Carshalton, Sutton, Thornton Heath, Broad Green and Epsom brought up the rear. Mr. A.C. Howard, Assistant Commissioner of Police & Major Gilbert, Chief Constable walked in the procession.

Those who read my research blogs will know that barely a week goes by without my visiting a cemetery somewhere or another in search of a “lost” grave. So this was no exception. Staff at the cemetery’s office were extremely helpful and gave me details of the grave and told me roughly where it could be found. However, I was warned that according to their registers the memorial stone was shown as being “sunken” in 1982 when a survey had been conducted. If it had sank into the ground some 30 years ago then there was very little chance of anything being visible to day. But as I always say - “if somebody wants to be found ……….”

I located what I thought was the correct part of the cemetery and as predicted all that could be seen was a grassed area with one or two headstones scattered here and there. My heart fell, but I took some photos anyway. Then I started to play detective. If I could find one or two graves on the opposite side of the path with plot numbers then I would perhaps be able to pin-point the spot more exactly. After 15 minutes I had managed to find three stones with numbers. I stood in front of one and turned around to look across the expanse of grass. Constable Wright’s grave should be in a straight line some 10 yards ahead. There WAS a grave with headstone there but as I approached I could see that the name was not correct and it certainly was not a sunken grave. I searched to see if this had a number anywhere on the surround but was unable to find one. I stood at the back of this grave dejected and despondent. My eyes dropped to the grass and suddenly I saw a ray of hope – or to be more precise what looked as if it might be a flat tablet. But it was covered in dried leaves, dirt and grass. The adrenalin started to flow and I was down on my hand and knees excitedly brushing leaves to one side. There was an inscription there but what was it – the important part was completely buried under a turf of grass. Nothing for it but to literally claw my way through – oh well, my nails will grow again !! At last the inscription was revealed:

I was overjoyed that I had managed to find the last resting place of Constable Wright AND his wife Bessie. Ada Ellen was actually the little baby daughter who had only known her father for the first few days of her life. How lovely that they are all buried together. I think I can say that Robert wanted to be found ! 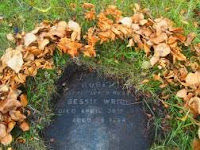 Robert's Metropolitan Police service record can be found at The National Archives.

If you have Police Ancestors in your family and would like some help with your Metropolitan Police Research then I am always willing to help. I can be contacted on the following e-mail address (you will need to type this address into your e-mail as this is not a direct link).